It did not take long for Joseph Marsh to recover from his troubles. Within a few months, Marsh began an evangelistic tour and attended a church conference at which he was appointed evangelist. After the death of Marsh in Michigan in the early 1860s, Benjamin Wilson and his nephew Thomas Wilson became more widely read and accepted among the leading exponents of the Age-to-Come doctrine, which among other things explained that the Jews would one day return to their land and become a nation. This doctrine was advanced long before the Zionist movement became a popular topic. Benjamin Wilson emigrated to the US from England in 1842 and settled in Geneva, Illinois, where he set up a publishing business. He was a skilled Bible scholar and had been trained in Biblical Greek.

After a few years, Wilson did what no man had done to date anywhere in the world. He produced an interlinear translation of the New Testament from the Greek text*. Under each line was a rough translation in English representing as closely as possible the meaning of the Greek language used in the passage. It was revolutionary, and very helpful to Bible scholars. The Age to Come people loved it. Problem was, it was not popular with the orthodox churches because it literally translated passages which had formerly been translated by others to represent orthodox teachings such as trinity, pre-existence and going to heaven.

An Overview of the Leadership and Development of the Age to Come in the United States: 1832-1871 by Jan Stilson, M.A. L. S 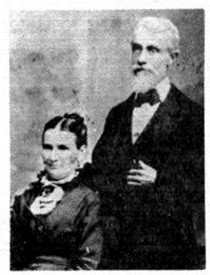 to 1869 and his nephew Thomas Wilson edited and published The Herald of the Coming Kingdom and Christian Instructor (the two magazines combined in 1870). Both magazines were popular amongst believers in the Age to Come, and Benjamin Wilson travelled widely preaching and ministering to churches.

John Thomas first met Benjamin Wilson in 1856, although some years earlier they lived for a time in neighbouring cities in Illinois. At the beginning of their association Wilson and Thomas believed similarly. Joseph Marsh and Benjamin Wilson also knew of each other, although they apparently never met. Strangely, the followers of Marsh and Wilson succeeded in uniting their various congregations into the Church of God General Conference denomination in 1921, many years after their deaths.

While Thomas and Wilson had much in common, and got off to a friendly start, they eventually divided over the issue of whether believers would be resurrected mortal or immortal. Thomas insisted that it was necessary to believe in mortal emergence, although it seems that while Wilson and many of his supporters believed in immortal emergence they did not consider it to be a matter of fellowship. Thomas did. They went their separate ways.