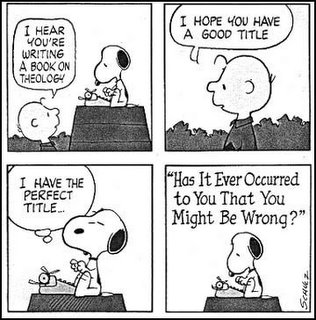 I came across this little gem from Charles Schulz earlier today. One thing I have learned over the years is that I have been wrong, more than once, and I expect I'll get some things wrong again.

One of the things I struggled with in my earlier Christadelphian life was the idea that to be "acceptable" to God we had to understand "the Truth" and that understanding some truths was "essential for salvation". Christadelphians have a concept of "saving Truth" - the idea that you cannot be saved if you get some doctrines wrong - and most of the divisions within the Christadelphian community have been over doctrinal issues which, to the outsider, appear to be about trifling details. However, if you believe that a knowledge of the truth is essential for salvation, then defining which truths must be understood in order to be saved becomes a life and death issue. Christadelphians in North America, for example, have been divided for 100 years over details such as whether the dead are raised mortal or immortal. To them, it's not enough to believe in the resurrection - how the dead are raised is an issue of such importance that most Christadelphians in North America won't fellowship or break bread with other Christadelphians who hold an opposing view.

The frightening thing about this is that many Christadelphians live in fear of the fact that because of their faulty understanding of some of the details they may be rejected at the Judgment Seat. (One ecclesia in Australia made a fellowship issue of where this Judgment seat would be - Mt Sinai, or Jerusalem!). It's so important to many Christadelphians to get these details right that error or "wrong doctrine" is often treated as a more serious issue than moral failure, and while "errorists" are disfellowshipped (excommunicated) moral failure is often tolerated (after all, with our sinful human nature sin is inevitable. Ironically, people who believe that sinlessness is theoretically feasible and that sin is not "inevitable" have been disfellowshipped, demonstrating that correct belief is more important than correct conduct).

However, at the foundation of this common belief among Christadelphians that God will only accept people who have first worked out the doctrinal details correctly, is a view of God which is itself perverse. The Bible teaches that we are saved "by grace". There is nothing we can do which will make us deserving of salvation - not even a perfect understanding of "Truth". Salvation is God's gift, and He gives it freely to people who turn to Him. He forgives sin, He overlooks failure, and He ignores ignorance. If God can save murderers, adulterers and thieves, He can save people with dodgy theology.
Posted by Steve at 10:04 am