The Cross and the Kingdom (5) 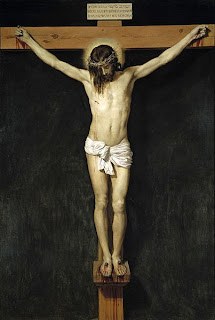 He was crucified alongside others sentenced for political crimes (“malefactors” or “robbers” interprets a word which refers to insurgents, not thieves). Earlier Jesus quoted Isaiah 53:12 “It is written: 'And he was numbered with the transgressors'; and I tell you that this must be fulfilled in me. Yes, what is written about me is reaching its fulfillment" (Lk 22:37).

On the way to His crucifixion Jesus made a rather strange statement which is best understood as a riddle. (A riddle is a saying whose meaning is not obviously known. It requires pondering and the answer may become apparent only after it is explained or some related event reveals its meaning in the meantime. A famous Biblical example is Samson's riddle in Judges 14:12ff).

"A large number of people followed him, including women who mourned and wailed for him. Jesus turned and said to them, "Daughters of Jerusalem, do not weep for me; weep for yourselves and for your children. For the time will come when you will say, 'Blessed are the barren women, the wombs that never bore and the breasts that never nursed!' Then they will say to the mountains, "Fall on us!" and to the hills, "Cover us!" For if men do these things when the tree is green, what will happen when it is dry?" (Lk 23:27-31).

This riddle about the green and dry tree is pointing us towards the events that would fall on Jerusalem within a generation. Josephus records how that so many people were crucified outside the walls of Jerusalem during the siege of AD 70 that the Romans had to cut down every tree to make crosses and the surrounding countryside was stripped bare of timber. Jesus told this riddle in the context of His prediction that a terrible time was coming. In this riddle He is effectively saying "If they treat an innocent man like this without provocation, imagine what they will do when they are provoked or given a reason". In this riddle Jesus was saying that He was a kind of forerunner of what was to come. As the green tree He was the first (or out-of-its-time) tree to be cut down. When the tree is dry or dead ("the time will come") it will be treated even more severely. So Jesus is saying that His death by crucifixion was just the first of many, and he was therefore identifying Himself with the fate of His people.

The crucifixion of Jesus was a political execution which foreshadowed the terrible things which would be inflicted on the people of God in the near future. His death was representative of God's people Israel, and He identified Himself with them.

This is clearly the meaning and emphasis which is attached to the crucifixion by the writers of the Gospels and Acts. Jesus Himself predicted that He would be "delivered into the hands of sinful men, and be crucified" (Luke 24:7). Peter said it was "wicked men" who put him to death by nailing him to the cross (Acts 2:23). Paul said it was "the rulers of this age" who crucified the Lord of glory (1 Cor 2:8). The consistent message is that the first Christians believed that the crucifixion of Jesus was a political murder. It was the unjust act of wicked sinful men. There was nothing in this message about God requiring or demanding a human sacrifice as necessary for the salvation of mankind, although that meaning may have been attached to the crucifixion later.

The canonical Gospels record seven sayings of Jesus while He was dying on the cross*. If Jesus' death was primarily an atonement for the sins of God's people this might have been the ideal time to say so. Instead the only thing in these seven sayings about the Gospel is Jesus' conversation with one of the criminals crucified with Him. The criminal asked a favour: "Jesus, remember me when you come into your kingdom" , to which Jesus replied "I tell you the truth today, you will be with me in paradise" (Luke 23:42-43). This political insurgent was being crucified probably because some act of insurgency had been thwarted or a plot had been uncovered or he was condemned because of his political associations. Whatever his involvement had been in overthrowing the Romans he had clearly failed. Beside him is a man who has also appeared to fail. Crucified on the charge of being "king of the Jews" - effectively a charge of treason - it would appear that Jesus too had failed. There could be no Kingdom with the King dead. Yet from this remark recorded by Luke we realise that this condemned political activist understood more about Jesus' message than did many of His disciples. He realised that Jesus was yet to come into His Kingdom, and that Jesus would have to be rescued from the cross or resurrected in order to do so. He knew that all was not over for Jesus.

In Jesus reply the emphasis should be on the word "today". The insurgent had asked "remember me when ..." and Jesus replied "I say to you today ..." He was telling this dying man that his future in the coming kingdom was assured and that he could die with this assurance. What a blessing it must have been to have died with no uncertainty about his future!

This conversation on the cross reminds us that to the very last Jesus' message was about the Kingdom. Isaiah 53 is frequently quoted by Christians to show how the death of Jesus as a sacrifice for the sins of mankind was predicted by the prophet. Strangely though, when Jesus quotes from Isaiah 53:12 Himself (in Lk 22:37) it is to say that He will be "numbered with the transgressors". (Some manuscripts also insert at Mark 15:27 "They crucified two robbers with him, one on his right and one on his left, 28 and the scripture was fulfilled which says, "He was counted with the lawless ones"). Even when Peter quotes Isaiah 53 later it was to encourage his readers to follow in Jesus' steps: "Christ suffered for you, leaving you an example, that you should follow in his steps. 'He committed no sin, and no deceit was found in his mouth' [from Isa 53:9]. When they hurled their insults at him, he did not retaliate; when he suffered, he made no threats" (1 Peter 2:21-23). Although Isaiah 53 seems to be the ideal prophecy to quote with respect to the crucifixion the NT writers, and Jesus Himself, quote it only with reference to His keeping company (or being crucified) with transgressors, and to His non-retaliation. It seems that the first Christians did not think of Isaiah 53 in the way later Christians do, as a prophecy of Jesus suffering as an atonement for the sins of the world, or at least if they did then they didn't quote it in the NT with this meaning. The Gospel accounts of the crucifixion would have been the ideal place to quote Isaiah 53, yet the Gospel writers don't take this opportunity and are silent.

The emphasis of the Gospels is that Jesus was falsely accused and executed as a political activist on a charge of treason because of His preaching a message about the Kingdom. To the very end He was identified with a coming Kingdom, and His final conversation reflected this. His immediate followers spoke of his unjust murder at the hands of wicked men. It seems that the emphasis for the first Christians was on Jesus' resurrection and exaltation as the most significant events in our salvation, rather than his death.


* The traditional order of the sayings is:
Picture is Crucifixion of Christ, by Diego Velázquez 1632 (in the public domain).

Labels: The Cross and the Kingdom