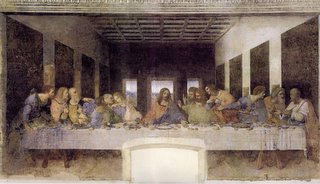 We have artists like Leonardo Da Vinci to thank for giving the impression that the 'Last Supper' was eaten at a table with Jesus seated in the centre. Da Vinci, however, was wrong.

The Synoptic Gospels (Matthew, Mark and Luke) are clear that the last supper was the Jewish Passover meal and that it was eaten in a reclining position, as was customary. According to the practice at the time, the table would have been close to the floor and the participants reclined on cushions. Alfred Edershem (The Life and Times of Jesus the Messiah) and other scholars have explained how the guests would have been seated. The meal would have been eaten at a three-sided table called a triclinium.

Edersheim carefully analysed the conversations and other recorded details of the last supper and demonstrated that we can actually work out the seating positions of four participants at the meal. 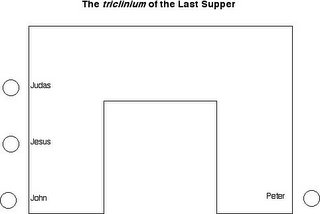 I won't go into the details here as to how we know this seating arrangement, but I can provide the details later if anyone is interested.

Another important thing which Edersheim brings to our attention is the number of people who would have been celebrating the Passover in Jerusalem in the time of Christ. This was one of the obligatory feasts when a large number of pilgrims would have been in the city.

It was necessary that the meal be eaten indoors, in groups, and following certain procedures which were carefully laid down in the Law and by tradition. Jerusalem on Passover night was a crowded city and space was at a premium. (By the way, if you have any doubts that the Last Supper was actually the Passover, Matthew, Mark and Luke were unanimous that it was - Mark even specifies that it was on the day when the Paasover lambs were sacrificed [Mk 14:12] - and the comment in John 18:28 that appears to contradict this can easily be reconciled with the Synoptists once we understand the terminology related to the Feasts of Israel. John refers to a claim by the Chief Priests that defilement would make it impossible for them to eat the Passover. By the time of Christ Passover day and the feast of unleavened bread which followed Passover were referred to collectively as "Passover". John's reference is to the priests being unable to join in with the festival meals during the week-long "Passover" festival, and not to the Passover meal itself which had already happened the night before. Any other interpretation puts John in conflict with Matthew, Mark and Luke).

To find a vacant "large upper room" (Mark 14:15; Luke 22:12) in Jerusalem at Passover would have well nigh on impossible. At best they would have arranged to have shared a large room, with other groups of between 10 and 20 people (the numbers specified by Jewish law). For several families or groups to have gathered together in one large room, and then to have eaten the meal around their individual tables would have been such a common practice that the Jewish Law (the Mishnah) explained the regulations for such cases.

Luke refers to a group of 120 "all together in one place" in Jerusalem a short time after (Acts 2:1). Elsewhere he refers to the Jerusalem church meeting at the home of John Mark (Acts 12:12) and there is some circumstantial evidence that the last supper was held in the same home (let me know if you'd like me to provide it).

It is extremely likely that Jesus and the Twelve celebrated Passover in a large room which could have accomodated 120 people. They probably shared the room with several other groups, possibly with other disciples, especially the ones who travelled around the country with them. This helps to explain why private conversations between Peter and John, John and Jesus, and Jesus and Judas , were not heard by the others present. There would have been considerable background noise.

Of course, I cannot "prove" that there were more than 13 present at the last supper, but I don't need to. The number of people present at the meal does not alter anything I've previously said about the nature of this meal. However, those who insist that this meal was a small, exclusive, private gathering have a bit of explaining to do.

Throughout the Gospels we find different types of meals where Jesus was present: from meals with disciples or friends to meals with His religious enemies; meals with crowds of thousands, to small, intimate gatherings. Each setting has lessons to teach us. One thing that was common to them all was that Jesus turned no one away. He taught His disciples and the exclusivist Pharisees to open their meals and celebrations to all who were disenfranchised, rejected, despised and considered 'unclean'. At His last supper he welcomed the one who would soon betray him, a disciple who was about to deny knowing him, and friends who were arguing about which of them should have the most prominent positions, in denial of all He had taught them about servanthood. In fact, within hours all of them would desert him (Matthew 26:56; Mark 14:50). Even knowing that he was about to eat with men who were weak, wavering, even treacherous, men who would deny knowing him or even betray him, he welcomed them all and greatly desired to have this meal with them (Luke 22:15). Such was our Lord's inclusiveness.
Posted by Steve at 10:00 am