What did Christadelphians set out to be? (4)

Early on in the Believers Movement there was an emphasis on the simplicity of the Gospel, and a resistance to any attempts to define their beliefs in a creed or statement of faith. For example, in 1855 John Thomas published a letter in his magazine from a correspondant referred to only as ‘Mary B.R.’ which included a one-paragraph summary in less than 300 words of her understanding of the Gospel. She expressed a desire to be baptised. John Thomas replied:

“Mary’s confession of faith is very intelligible, intelligent, and scriptural, and reveals no reason why water should be forbidden that she should not be baptised”.
(Herald of the Kingdom and Age to Come, March, 1855, page 69).

This confession did not speak of the mortality of man, the nature of the devil, the relationship between Jesus and the Father, the work of the Holy Spirit, or many other matters considered to be ‘fundamental’ by many later Christadelphians. Yet John Thomas commended it as ‘an intelligent confession’ and adequate for candidacy for baptism.

One of the prominent brethren in the Believers Movement in Scotland was George Dowie (1824-1895), being persuaded of John Thomas's views by March 1853 (a year before the 14 year old Robert Roberts was baptised in Aberdeed, Scotland). Andrew Wilson comments about him that:

"Dowie wished to preserve the exciting, experimental debatability of issues which had existed for his peers and himself in the period 1848-1864". 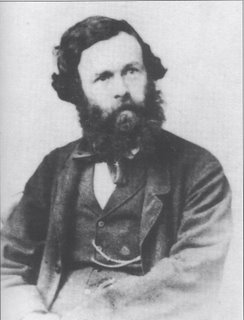 It seems that the Scots ecclesias generally were made up of such independent-minded individuals, and Dowie (pictured) was held in high esteem. He was a close friend of the Roberts family (and his signature is on Robert & Jane Roberts marriage certificate as a witness), but by 1864 they had fallen out.

Around this time John Thomas began to publish his views on the Revelation in a 3 volume series called Eureka (volume 1 was published in 1861, volume 2 in 1866 and volume 3 in 1868). Dowie disagreed with much of Thomas's interpretations, and presented an alternative view in his Messenger. Thomas made it clear to Roberts that he wasn't pleased. Relationships between Thomas and Roberts were already "frosty" (and Roberts refers to this in his autobiography). In 1864 Roberts wrote to Dowie saying that he no longer regarded him as a brother, and shortly afterwards there was a thawing in the frost between Thomas and Roberts. Later that year Roberts began publishing his own magazine, The Ambassador (later renamed The Christadelphian).

It would be unreasonable to infer from this incident alone that Roberts disfellowshipped his old friend in order to advance his own position within the Believers Movement (soon after to be renamed Christadelphians), were it not for the fact that history was to repeat itself with the disfellowship of another prominent brother, Edward Turney, in 1873 and the popular and charismatic Robert Ashcroft in 1884. (I will write further about these incidents in subsequent messages).

What is noteworthy about the disfellowship of Dowie is that it actually had nothing to do with his interpretion of Revelation - the reason for Thomas's displeasure. In an article published in April 1864 Dowie alluded to a belief in a personal devil. This gave Roberts the excuse he needed to be rid of Dowie and to regain Thomas's approval. A fellow Scot, James Cameron, pointed out that Roberts used the 'personal devil' matter as a sudden and opportunist ground for disfellowship. Until that point this had not been a cause of disfellowship and Roberts own brother-in-law pointed out his inconsistency in that another person known to Roberts was not disfellowshipped even though they held identical views to Dowie regarding the devil.

Several years later when Roberts visited the Aberdeen ecclesia (by this time known as Christadelphians) a confrontation took place and Roberts refused to break bread there because they had not endorsed his judgment in the case of George Dowie. It seems that many were not happy with the new tightening up of doctrinal views, especially when it was largely being controlled by a magazine editor, and not by consensus of the brethren.

An interesting thing about this incident is that it was apparent that not all the Believers held the same views as Thomas and Roberts about the devil, but that they did not regard differences of opinion about this as cause for separating. Another group which grew out of, or parallel with, the Believers Movement is the Church of God General Conference, sometimes called Church of God of the Abrahamic Faith. To this day some Abrahamic Faith individuals and churches hold views similar to Christadelphians on the identity of the devil, while others believe the devil to be a fallen angel. This is not a cause for division and the two views exist happily side-by-side in the same church or denomination. (The Church of God General Conference [COGGC] also resembles the Believers Movement churches more closely than later Christadelphians in that they generally practice open communion rather than closed communion)*.

Incidentally, it seems that George Dowie died as a Christadelphian. After the division in 1885 when many ecclesias broke free of Roberts' authoritarianism he joined an ecclesia not under Roberts control.

In summarising what Christadelphians set out to be, my point # 4 is this:

Christadelphians set out to have a simple faith and to tolerate diversity of opinions on many matters.

* The COGGC holds many of the same doctrinal distinctives as Christadelphians. For example, they are non-trinitarian, believe in conditional immortality, the second coming, the restoration of Israel, and the kingdom of God on earth.
Posted by Steve at 7:40 pm