What did Christadelphians set out to be? (5) 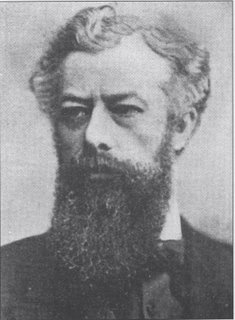 I referred in my previous message to an incident in 1873 when history would repeat itself.

Edward Turney (pictured) was the editor of The Christadelphian Lamp (later renamed The Christian Lamp). In 1873, two years after the death of John Thomas, Edward Turney and Robert Roberts fell out over their understanding of the theological significance of the death of Christ. Roberts, without the ascent of his "managing brethren" or the Birmingham ecclesia (of which he was a member), unilaterally announced in The Christadelphian that he "withdrew fellowship" from Turney and all who held his beliefs. Andrew Wilson in The History of the Christadelphians 1864-1885 commented that:

"By this action, Roberts established a precedent for dealing with doctrinal dissidence ... However, stirring deep in the sensitivities of Roberts's brethren was the impression that this type of action was altogether too summary and abrupt amongst a congregation of brethren. In 1885, many Christadelphians reacted to a repetition of Roberts's conduct of 1873 by forming an entirely new sub-sect, known as the 'Suffolk Street fellowship'."

The fallout for Christadelphians was significant. In 1872 more conversions to Christadelphianism (as baptisms) were recorded in Nottingham as a result of Turney's preaching than in Birmingham where Roberts was based. A similar situation occurred in Essex where all the baptisms prior to 1873 occurred at Maldon as a result of David Handley's preaching. (David Handley [1822-1886] shared similar views with Edward Turney). After 1873 the number of baptisms in Nottingham and Essex dropped off sharply, and the Christadelphian ecclesias in these areas never regained their momentum. Wilson noted that:

"Apart from the Inspiration Controversy, which came to a head in 1885, no other schism appears from official figures to have influenced the Christadelphian movement so much as the 'Clean Flesh' heresy"* (p. 345).

I mention this incident in 1873 to demonstrate that a pattern was emerging in the Christadelphian community, with Robert Roberts becoming increasingly authoritarian, and removing prominent brethren who refused to submit to his authority. It began with the disfellowship of the very capable leader George Dowie in 1864, was repeated in 1873 with the ostracism of the successful preachers Edward Turney and David Handley and their supporters, and came to a head with the excommunication of the popular speaker and writer Robert Ashcroft and the 1885 division (more on that later).

The Believers Movement was changing.