What did Christadelphians set out to be? (6) 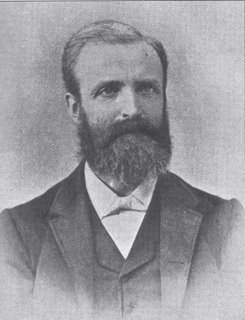 History was to repeat itself again in 1884-5 - this time with even more serious consequences than before. A new mould was being cast for the Christadelphian movement.

In 1876 Robert Ashcroft (1842-1921 pictured), a Congregational minister, became a Christadelphian. Two years later he founded a chain of Young Men's Mutual Bible Study Associations to train young men in the methods of Bible study and public speaking (Mutual Improvement Classes have been a part of Christadelphianism for over a hundred years).

Andrew Wilson described Robert Ashcroft's rise to eminence as ‘meteoric'. Within a short time he was recognised as a prolific writer and prominent speaker. He visited the Christadelphians in the USA on a lecture tour, his visit being regarded by the American brethren as a great success. One of them wrote to The Christadelphian that "he never listened to anything like Brother Ashcroft's discourses which move even him to tears". In 1882-83 praise for Ashcroft poured in from all over the USA, even from scholarly brethren such as Thomas Williams, and he was invited to move to the USA.

By 1883 his standing as a Christadelphian was such that he was made assistant editor of The Christadelphian magazine. One writer described Robert Ashcroft in 1885 as having ‘more moral weight in the ecclesias than any living brother'.

Roberts reacted badly to this adulation of his assistant editor. It would be difficult to say, over 100 years later, whether jealousy on Robert's part had anything to do with it; however, even in 1884 Roberts found it necessary to answer questions as to whether he was jealous of Ashcroft or not.

In September 1884 Ashcroft left Birmingham and his assistant editorship and started a magazine called The Bible Exegetist. Roberts announced Ashcroft's departure in his magazine and wished the project God-speed, saying he would rejoice in its success.

Almost immediately, however, Roberts began what a contemporary brother described as a 'campaign' against Ashcroft. He accused him of teaching a 'partial inspiration' of the Scriptures and wrote lengthy articles in The Christadelphian attacking Ashcroft.

Attempts were made by other brethren to prevent the issue from causing a division. Andrew Wilson wrote of one such attempt:

Professor D.L. Evans, who had tutored Ashcroft in Hebrew and Greek, and himself at this point a Christadelphian, visited his former student and produced a formula on the subject of Inspiration which he hoped would heal the breach. Roberts printed its text, in apparently approving terms, in the magazine.

Roberts was engaged, simultaneously, in actions which did not appear to proceed along the same conciliatory path, and which were not recorded in The Christadelphian.

In January 1885, an ecclesial meeting of the Birmingham (Temperance Hall) ecclesia was held at which an article by Ashcroft in his Exegetist was discussed*. A vote was taken, and the majority were against Roberts. The following month Roberts tried again, and at a meeting of the ecclesia a motion was adopted regarding their understanding of inspiration which said "[we] will take no action of withdrawal from any member of the ecclesia, until accusation is made against him in scriptural form, and he has been heard in his own defence".

In May that year an ecclesia in the USA wrote a letter praising Ashcroft, and support for Ashcroft from British ecclesias began to grow. Even members of Roberts' own ecclesia invited Ashcroft to lecture on their behalf. Several ecclesias throughout Britain passed resolutions supporting Ashcroft.

Roberts invited several brethren 'to tea' and for a quiet talk on Friday 22 May. After tea Roberts dropped a bombshell asking several brethren to resign from the ecclesia, and then proposed that if the brethren present denounced Robert Ashcroft and Joseph Chamberlin all could be forgiven and forgotten. They refused.

The next day Roberts posted 'postcards' asking the recipients to sign their acceptance of Roberts' view on inspiration, and their promise to withdraw fellowship from brethren Ashcroft and Chamberlin. Roberts made it clear that he held the lease to the ecclesial meeting place "and whoever remained with him would remain in the premises".

Roberts then sent ‘tickets' to his supporters in the ecclesia, which they were to produce in order to gain admittance to the meetings of the ecclesia. Fellowship was therefore denied to anyone not holding a ticket, and a physically strong brother was put in charge of the door to bar their entry. A meeting of Roberts' supporters, possessing tickets, dissolved the ecclesia and reconstituted themselves with a new basis of fellowship including Roberts' definition of inspiration.

While the events of 1885 have been known as the 'Inspiration Controversy' it's clear that the real issue was fellowship. The question of Ashcroft's views on inspiration were secondary. The primary issue was Roberts' dictatorial handling of the matter and whether any authority as spokesman for the whole brotherhood should rest on the office of editor of The Christadelphian. Many brethren objected to Roberts' heavy handed approach and his attempts to enforce his own views on the whole brotherhood by having them enshrined in a rigid Statement of Faith which had to be accepted as a condition of fellowship.

The controversy which followed Robert Roberts' withdrawal of fellowship from Robert Ashcroft divided the brotherhood for nearly 70 years, and its repercussions are still being felt.

* Robert Ashcroft denied that he ever intended to teach what Robert Roberts made out in regard to that article. Roberts' own brother -in-law, William Jardine, described this article as "the best article on inspiration that has appeared in Christadelphian literature".
Posted by Steve at 11:10 pm